Americans love their foods – in supermarkets, on television, at restaurants and now even on their mobile phones.  But there is little doubt that in the coming years, we will continue to see food prices rise based on environmental conditions as well as higher production costs.

Many of the savings tactics most shoppers deployed in 2007 as the recession began are still being used each time they shop for groceries – using coupons, frequent shopper cards, shopping lists, shopping at non-traditional foods stores and even trading down their choices to less expensive brands are part of the regular routine.  Following are the top ten food trends predicted for 2012, according to Supermarket Guru Phil Lempert.

Look for consumers to shave costs by augmenting their recipes by decreasing the amount of the more expensive meats and seafood and adding more non-meat proteins that are filling and less expensive, including whole-wheat pasta, tofu, lentils, brown rice and vegetables to recipe.  Expect shoppers to use their mobile devices to calculate a price per portion cost rather than the unit price of individual products listed on the shelves. Just as the younger generation uses social networking as part of their everyday lives, expect this generation to be the “forever frugal consumer” using more coupons (higher than any other demographic) and searching for deals on line (63% spend 3 hours or more each week – double that of any other group).

Apps like Foursquare, GoWalla, Living Social and Yelp have shown how “group” is better than “self.” Expect to see super food apps that bring previously unknown people together with common likes; to eat, prepare and shop together.

The generation of 76 million who started turning 65 years old last year will control 52% of the total $706 billion spend on groceries by 2015 – making them the largest food influencers and purchasers.  Expect supermarkets to cater to the Boomers, not only by offering the foods, beverages and services to satisfy their growing interest (and need) for health — but to take a good look at the physical shopping experience, to make sure that the aisles are wide, to lower the shelves and most importantly to make them feel welcome and respected.

Shoppers have become increasingly interested in knowing where their food comes from and how it is produced, which is why 2012 will bring an added emphasis to a different kind of food celebrity — the farmer.   Expect to see more advertising and television programs starring these real food experts (vs. actors pretending to know their food).

TREND #5: THE END OF THE CHECKOUT LANE

Many shoppers are learning to appreciate the tech-savvy nature of self-checkout – the ability to compare prices at nearby retailers, cell phone scanners, in-store interactive media devices, QR codes, RFID and mobile coupons.  For many shoppers high-tech adds to personalization with suggested purchases and targeted offers based on their histories in the store, which is typically delivered in a functional way.

Food trucks are replacing gourmet and specialty stores as the channel to experiment and discover new food experiences — especially when it comes to ethnic foods.  More often than not, these ethnic food trucks are actually manned by descendants of the actual cuisines and cultures being offered; with the ability and knowledge to share the heritage and romance of the food — a benefit many shoppers have come to enjoy and expect from shopping at Farmers’ Markets for produce.

According to the Bureau of Labor Statistics, 41% of men are now doing the food preparation as compared to just about half that amount in 2003.  Because of the economy, more men are at home, suggesting there is an opportunity for marketers to engage men who are taking on the role of family caregiver.

TREND #8: EATING AT HOME, WITH A TWIST

With continued pressure on the economy more men and women will be choosing to eat at home to save money, which has happened before – but this time around expect a twist. Think of it as Xtreme Home Cooking where, following the lead of Extreme Couponers, these everyday cooks pride themselves on making the most for the least.  Look for food groups to form that cook together, crowd sourcing in the kitchen if you will, with the same primary focus on cost – shopping, cooking, eating and storing leftovers in bulk.

Sugar has been an ingredient that has been the center of a lot of debates, especially as the latest update on the Dietary Guidelines for Americans recommends reducing the amount of added sugars of all kinds (especially in soft drinks.)  Look for reduced-sugar products to be the biggest health claim in the coming year along with a revised Nutrition Facts Panel.

Consumers judge the readiness of foods like microwave popcorn or burgers on the grill by the sounds that these foods make. They judge the freshness of carbonated beverages based on the sound of the gas escaping the container as it opens, and the duration of the sound of the bubbles as they pour. Multisensory perception will be one of the new “food sciences” in 2012 as psychologists and food scientists join forces to design, create and influence the sounds of our foods to convey freshness, taste and even health attributes.

Two days ago an ECOFFEE prospect tried to convince us that sustainability is just a marketing word, and that consumers are not able to understand whether the retail product/store is really sustainable or it is just greenwashing.
We have already dealt with this kind of prospect – and many became enthousiast ECOFFEE customers and sustainability advocates. Data and market analysis are the only way to convince the sustainability skeptical about the counter effects of greenwashing practices.

That day, we showed to our prospect the Cone Inc. Trend Tracker recent analysis about U.S consumers and their behaviour towards greenwashing practices, dated March 24 2011.

Results are very interesting – and very motivating for those of us who believe in real sustainable business practices.
When consumers discover a claim to be misleading, they will take the following actions:

Three mock cleaning products were showed to consumers, who were asked to “purchase” the one they believed to be the most environmentally responsible. They were also required to indicate what they think the certification, claim or image on each package represents.
The results are as follow: 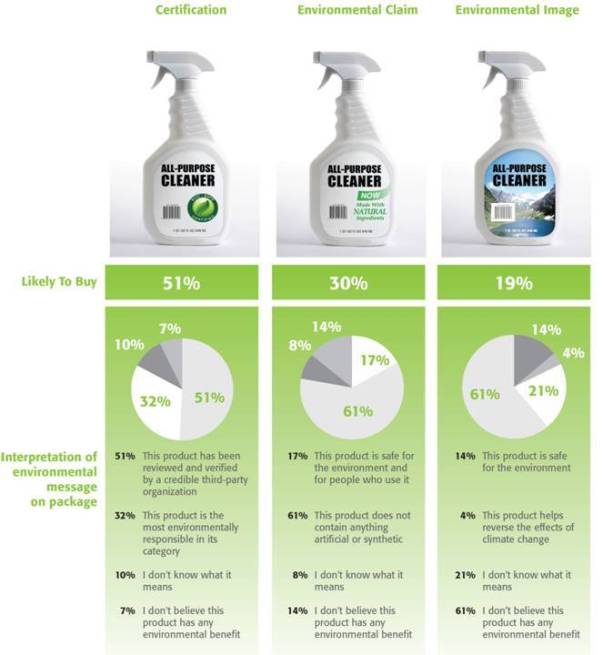 Another very interesting survey finding concerns the inaccurate interpretation by U.S. consumers when it comes to words such as “green” and “environmental friendly”. More than two-in-five Americans (41%) erroneously believe these terms mean a product has a positive (i.e., beneficial) impact on the environment. Only 29 percent understand that these terms more accurately describe products with less environmental impact than previous versions or competing products.
Last but not least, 59% say it is only acceptable for marketers to use general environmental claims when they are backed up with additional detail and explanation:
-23% say vague environmental claims should never be used.
-79% want detailed information readily accessible on product packaging.
-75% wish companies would do a better job helping them understand the environmental terms they use.

It is not necessary to add other comments to the above survey results, but if you are interested to know more, you can download the whole survey linking to the Cone Inc. website.

One of the in-store marketing biggest issues ever is how to reach customers with customized offers while they are shopping. U.S.A retailers and consumers are going to have a solution handy in the next future: Shop O’Lot.

Shop O’ Lot is a self service platform which makes major retailer participation very easy. The model is based on a predictive analysis engine, that builds a customer’s shopping profile, then allows retailers to reach these customers in real-time while they are shopping, offering them customized discount coupons.

The app uses GPS and bar-code scanning for delivering the content and will be released on the iPhone and Android OS platforms.

Bob Pack, CEO says, “major retailers are now competing with product search and comparison apps that can actually drive a customer to buy from a competitor, a practice known as “scan and scram.” We have a complete solution to really help drive retail purchases, this goes well beyond mere Geo- location and focuses on individual target marketing. Once we understand the shoppers tastes, delivering them customized product deals only by the store they are in, will help keep shoppers loyal.”

Shop O’ Lot is still in the testing phase and plans a 2011 launch and retailers and consumers, can sign up now to be part of our beta program directly on Shop O’Lot website. (Source: americanbankingnews.com)