Global revenues from augmented reality (AR) applications and services are projected to reach $1.5 billion by 2015, according to Pocket-lint.com

Augmented reality is a term for a live direct or an indirect view of a physical, real-world environment whose elements are augmented by computer-generated sensory input, such as sound or graphics. 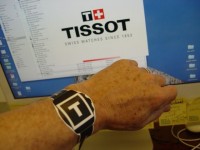 Tissot watches has had success implementing an AR campaign. By placing a dummy watch around your wrist, which has a code on the face, and holding it in front of your webcam, the app displays it on the screen as a virtual, 1:1 scale version. The benefit is you get to “try on” the watches to see which suits you best before purchasing.

Holition, AR, 3D and future technology creative agency, which is based in East London, is responsible for the campaign.

“What we’re trying to do with the worn-on-the-body applications is enable a real business functionality for it. It engages consumers, it enables people to understand the product and therefore it enables them to take that step closer to purchasing the product as well,” said Lynne Murray, brand manager at Holition.

“Tissot’s brand public relations grew 600 percent through the campaign compared to 100 percent growth that they usually expect to achieve. So, even as a communication tool, it’s a hugely engaging way for brands to have another and new point of contact with its audience. AR is a new way of communicating socially, a new way of getting people on board with the brand.”

Murray expects these types of technologies to give way to a fully integrated retail experience in the not too distant future. (Source: Retailcustomerexperience.com)