It was a nice February morning in Dubai when my attention was captured by an article published on BuildGreen magazine. It was about Sheikh Abdul Aziz bin Ali Al-Nuaimi , member of the ruling Royal Family of Ajman, UAE. I was stroked by the words of Sheikh Abdul Aziz, also known worldwide as the Green Sheikh, who choose to use his influence and connections to create a better world through faith, charity and sustainability.

I said to myself: “This is a man I absolutely have to know”. And thanks to his openness, this happened at the end of May.

He agreed to meet me in a three-day long meeting in Ajman, suggesting me where to stay and setting up a flexible schedule to adjust his previously scheduled meetings. My idea was to share with this big influencer all the information, projects and ideas which form ECOFFEE to have his highly reputable opinion about. What happened was that I did not only have the opportunity to have the Green Sheikh commenting what I have been building during the last year, but he also wanted me to join all his meetings and conference calls, introducing me to his world. And it is a big, very interesting one.

Sheikh Abdul Aziz today is Vice President and CEO of the Al Ihsan Charity Centre which supplies food and essentials to the needy. He has a life mission which is guided by Islam: “to achieve all manners of excellent deeds for the satisfaction of Allah (Muslim and Non-Muslim God).” In that mission is protecting the environment and thanks to his education (MA in environmental management, PhD in clean production) and his zealousness, he has activated and coordinated the formation of environmentally and socially responsible non-governmental organizations; created partnerships between public, private and local communities; has advised and raised awareness among decision makers, has participated in steering committees for strategic sustainability in major sectors, and have promoted these issues in the media in the regions of the United Arab Emirates, the GCC (Arabian Gulf Region), and in some other Arab countries, like Jordan. Last but not least, he believes that supporting and educating young generations is a must to create a better, sustainable future.

As you might guess, I was a little bit intimidated when I first met him, but he was incredibly welcomed and “Down to Earth”, letting me feel at my ease straightaway. “Come with me, I show you the Al Ihsan Charity Centre”. He guided me to Centre, introducing me to his office manager Mr. Khalid, a smart and cleaver young future businessman, and Dr. Haki before leaving for an important meeting. Dr. Haki carefully explained me what the Center is about and what are the activities that takes place in that premise. 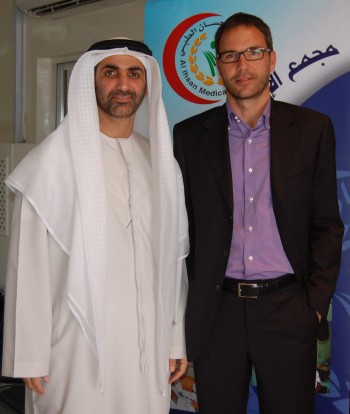 The Al Ihsan Charity Center, provides financial, health care and many others support to 9,000 families, 25% of local Emiratis and where each afternoon food is distributed to those who are in need. I was speechless and said to myself: “This is a great man who speaks with his actions, not only with wise words”. Back from the meeting, the Green Sheikh drove me to his house to have dinner with his kids – can you imagine how honored I was to be welcomed to his house too? After a delicious meal, we sat down in the living room and it was my turn to start talking to introduce him ECOFFEE. The knowledge and expertise of the Green Sheikh about the issues of sustainability and responsibility, much wider than mine and much at a worldwide level, brought a new perspective inside the ECOFFEE project. There are quite a lot of similarities between the ECOFFEE project and what Sheikh Abdul Aziz is fighting for. He has directly and indirectly influenced a ban on petroleum-based plastic bags, a new recycling program in Ajman, and an initiative to install sensors that will help reduce energy and water consumption. Although supportive of Masdar City as a hub for R&D in the UAE, the Green Sheikh prefers more modest initiatives, believing that “if 20% of the people had little Masdars and the government gave incentives that would make a difference.” As in ECOFFEE, small everyday gestures can make a big difference.

Surprise was not over that day, because our conversation had to be interrupted for a scheduled conference call with Terry Waghorn, CEO of Katerva, a charity organization registered out of the United Kingdom which delivers the Katerva Awards—the pinnacle of global sustainability recognition – and which acknowledge Sheikh Abdul Aziz among its Goodwill Ambassadors for his ability to take his ’holistic living’ message to the world, activating his moral networks worldwide and galvanizing people of all ages, religions and backgrounds. I was invited to assist at that conference, during which the Sheikh showed once again his being a great, “down-to-earth”, big influencer.

The day after, Sheikh Abdul Aziz had to attend the GITSI conference. GITSI is the Global Initiative Towards a Sustainable Iraq. He did not change his schedule because of my presence, much better: he kindly asked to change the conference schedule to allow me to introduce ECOFFEE to all the participants. That was a great opportunity given me by Sheikh Abdul Aziz and I was able to shrink my usually 40 minute long presentation into a dense 15 minutes span. All his supporting and sharing really made me understand what he meant by ” I am following the core values of an Islamic philosophy based on appreciation and respect. My holistic living message describes one as being connected to the daily circle of life; balancing the spiritual, the intellectual, the physical, the emotional, the aesthetic, the environmental and my own inner peace to help spread peace throughout the world and in the process achieve wisdom.”, values that we often forget about and that should instead permeate our lives.

The conference was over and we left the International guests towards another interesting meeting with the upcoming Dubai HUB managing partners. The time came to pray – and the Sheikh Abdul Aziz wanted to share with me that experience too, allowing me to follow him at the Mosque, another great new experience I have to thank him for. He told me: I will teach you the Wudhu, how to act in the Mosque and how to follow us in the prayer movements but you will be totally free to pray yours and our God. Another sign of his open mind. Meetings with big influencers and great inspiring conversations took place the last day too, and again the Sheikh introduced me to his world and network reinforcing my belief that it is possible to create a better business, a better life and a better world through collaboration, sharing and deep respect.

1 thought on “Amazing meeting with the “Green Sheikh””